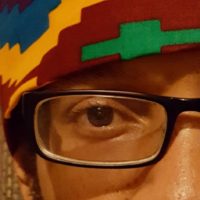 “What we will now do is involve ourselves in any thing or any stage of development in the community, support that development, and try to introduce some insight into it.  Then we will work very hard with the people in the community and with that institution so that it can negate itself.” ~ Huey Newton, To Die For The People

*Note that Soul Restoration collection was done previously on March 8th, but team members are still available to collect donations upon request.

Last Friday after many discussions with Brandon Daurham and TiGi Nii regarding how to be of assistance to the Feed The People Program, I manged to carve out space in my schedule to participate in a distribution.  It is currently held every Friday from 8 pm to 10 pm along the south side of the block on 79th Street between Cottage Grove and Maryland.  As I was also preparing for Market Day that weekend, it was about twenty minutes past the 9 o’clock hour before I arrived.  Upon meeting other members of the team, I laid my bag aside and queried Brandon about where I should deploy at which point I was briefed on the structure and given some handouts to disseminate.

The format was easygoing.  Engage any passerby in dialogue and leave them with a piece of literature.  Direct the attention of interested parties to the hot food, canned goods and clothing available in the background.  Inform neighborhood residents of the schedule while inviting them to return and assist us with the program.  Inside of this format rests a wide latitude for further conversation regarding additional community needs, other local programs offering lateral collaboration or the mere extension of a listening ear to someone who has been without one for too long.

The experience was refreshing and reminiscent of an earlier Chicago era as Minister of Information in the Temple of Applied Theosophy, but emotional sentiment is no measure of effectiveness alone.  A short while into the undertaking, Brandon solicited my opinion on which strategies appeared to be working and what changes might make the operation more successful.  Some thoughts were rendered on additional signage which would make the purpose of our activity more immediately visible along with changes to the design of the handouts which would direct the line of sight of the reader towards key passages to be retained.

I am now committed to aiding Brandon in conveying to others the gravity of the program he has implemented.  The beauty of this process is in its simplicity.  The handouts are not awash in ideology, but instead employ brevity as an art with one page touting a list of practices anyone can apply to enhance their neighborhood.  Another handout concerning the FTP program directly is a brief description of the effort with reinforcement of why it is necessary for members of the community to band together in order to help those whom are in need of assistance.  In a dialogue I held with the brother while on site, one of his statements about the program which was particularly impactful was that ideology had no place here.  Any person of any ideological grounding can come and participate in building this community.

As I was reviewing the handouts with Brandon earlier this week, I had an opportunity to ask him about the statement “Let’s Get It!” which appears at the top of each piece of literature.  I knew that he had worked on a newsletter of the same name, but I didn’t know the meaning.  He simply described it as a sort of branding or tagline.  He is also fond of closing many of his organizing calls with the phrase “We Out Here!”  Both of these statements draw parallels in his personality.  “Let’s Get It!”  He is undaunted in stepping into an effort with no particular initial plan or strategy and adapting to the changes that occur along the way.  “We Out Here!”  He plans to be precisely where the community requires his service available and ready to answer the call.

Where do we need to be?  As I stood with the family there that night, an idea was planted which would would bloom into the following notion while preparing this entry “Presence is a sort of propaganda.”  One of the master strokes that we can learn from the work of the Black Panther Party is their ability to employ propaganda in ways that made revolutionary values both attractive and memorable.  These are not things that should be the end goal of our efforts to organize for change in our community, but they should be things that we consider as ways to engage the minds of the community while we seek to plant a deeper ethos of unified action.  The Feed The People Program is a simple plant runner extending its stem out into the community where it may take root in the minds of those who don’t attend our educational forums or participate in our cultural festivals or come to anyplace where we think “conscious” Black people congregate to preach to the choir.

Unity is a word that has been bandied about in our organizations rising to the level of something ethereal, supernatural or mysterious.  In order to help it find firm footing in our minds once more, I have taken to describing unity as the act of two people walking together in the same direction for an extended period of time.  If they reach a point where they need to diverge in order to seek another destination, they were at least understood to be in unity until that point.  There is nothing difficult about that concept to grasp.

The Feed The People Program and the Healthy Food Hub are not operating towards wildly different aspirations.  The Healthy Food Hub wants to achieve local economic and food system sovereignty for our people within their own communities in order to ensure a greater level of security, stability and independence for those who reside there.  We also desire to feed the people and ensure that there is never too little for every member to have a full opportunity to earn their share.  Let this be an exercise in comprehending this definite concept of unity as we cooperate towards a more equitable society in all areas of human activity.

This weekend is the 4th Annual Feed The People International Weekend and Chicago has placed itself as one of the service sites which will follow the same schedule as the standard Friday distribution mentioned above.  If you would like to contribute to the effort, email me at mjstrode@gmail.com and if I am not able to assist you, I will place you in contact with another member of the team.  The call is for produce, canned goods, and clothing, but if there is anyone whom would like to assemble care packages of hygiene or toiletry packages, those items would also be helpful in advancing the aim of the distribution program. 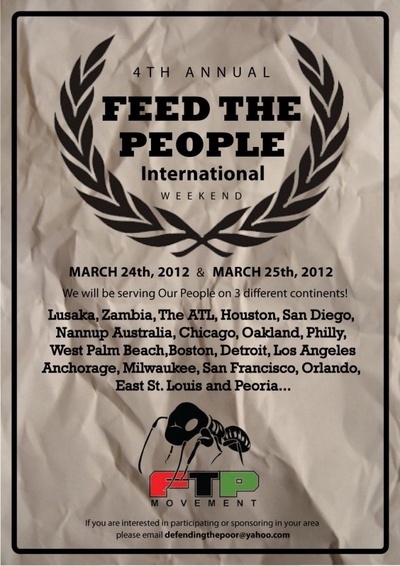